Plants and flowers poisonous to dogs

They may look beautiful displayed in and around the home, but a lot of popular plants and flowers can be dangerous to our canine companions. From staple household flowers such as lilies to common garden plants such as ivy, discover which poisonous plants you should keep out of your dog’s reach and why. 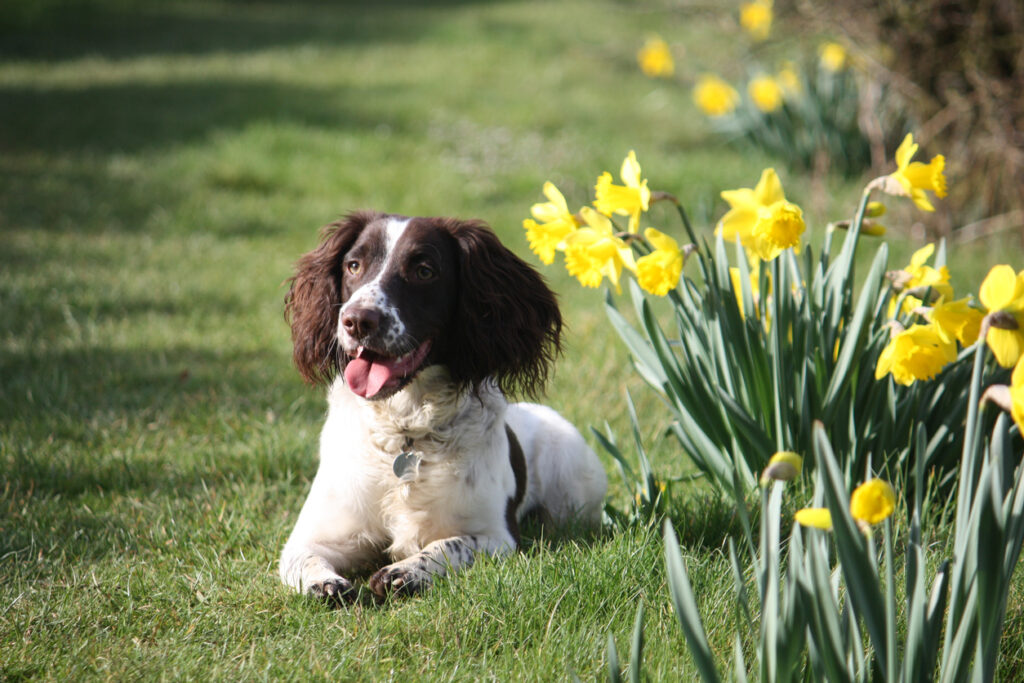 Daffodils can be toxic for dogs, most often after ingesting the bulb but occasionally after ingesting the flower heads. Coming into contact with daffodils this way can cause vomiting, diarrhoea, and lethargy, which, in severe cases, may even result in dehydration, tremors, and convulsions. These dog poisoning symptoms can be seen from 15 minutes to 24 hours following ingestion. Other spring flowers, such as crocuses and tulips, are considered to be less toxic, but it is still recommended to seek veterinary advice if you are worried that your pet has ingested them.

Dogs who eat ivy (otherwise known as hedera helix) commonly develop dribbling, vomiting, or diarrhoea. In more severe cases, you may see blood in the vomitus or faeces. Contact with ivy can cause skin reactions, conjunctivitis, itchiness, and skin rashes. It’s important to be aware that ‘poison ivy’ (otherwise known as rhus radicans) is a different plant.

Every part of a bluebell, one of the nation’s most loved wildflowers, is toxic to dogs. Symptoms of poisoning are concern the stomach, intestine, and heart function, including vomiting, diarrhoea, and abdominal discomfort. There is a risk of heartbeat irregularity (arrhythmia) if a significant quantity is ingested.

Although serious cases of poisoning are rare, ingestion of a conker can cause marked gastrointestinal signs; drooling, retching, vomiting, diarrhoea, and abdominal pain. The conker’s shell, as well as the conkers themselves, also presents a risk by potentially causing an intestinal blockage. Dogs usually vomit any ingested conkers quickly, meaning treatment to control vomiting may be needed.

Exposure to acorns in dogs is common in the autumn and winter months. The toxic ingredient is thought to be tannic acid, which can cause damage to the liver and kidneys. Signs include vomiting, diarrhoea (with or without blood), abdominal pain, inappetence, and lethargy. Ingested acorns can also cause intestinal blockage. 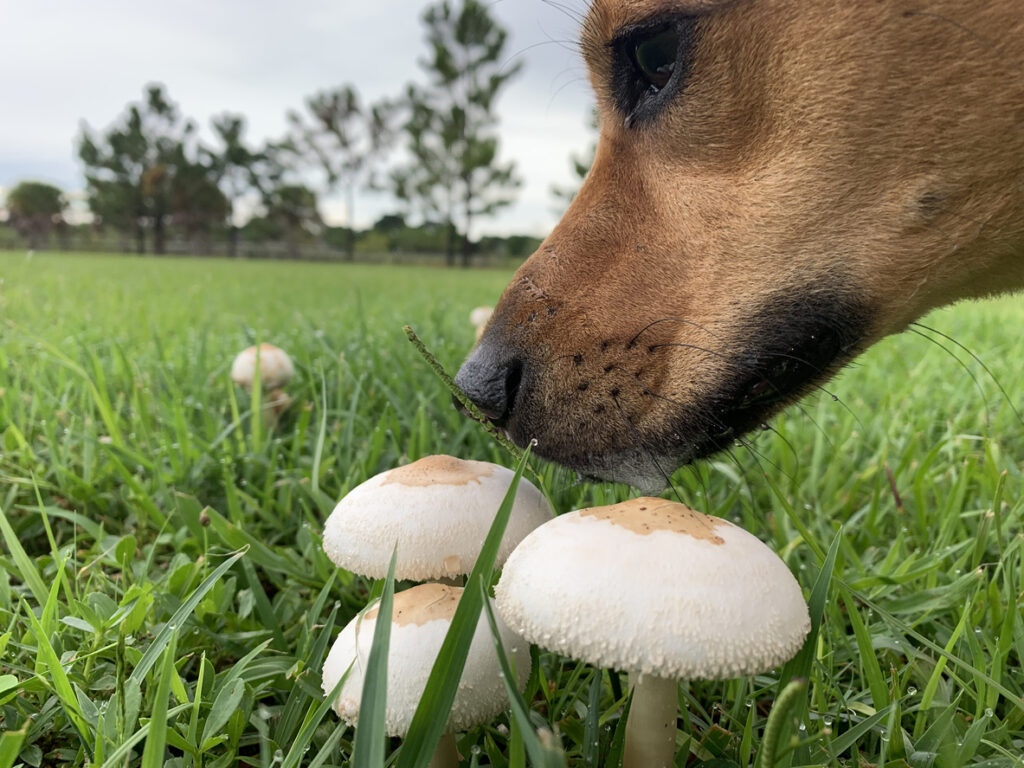 The most common account of poisoning is by the mushroom ‘amanita phalloides’ (otherwise known as the death cap), which is extremely toxic when consumed by dogs. Signs include mild vomiting and diarrhoea but can lead to more severe digestive problems, neurological (brain/nerve) disorders, and liver disease.

Poinsettias are originally from Mexico and are famous for reaching full bloom in December. Eating poinsettia can cause drooling, oral pain, and vomiting, but only if they’re ingested in large quantities. On the plus side, the plant contains an irritant sap and it’s unlikely your dog would eat enough to cause serious harm because of the taste and irritation from this.

Alongside poinsettias, amaryllis are the best selling Christmas plants and can flower for up to two months. The stalks, flowers, and bulbs contain phenanthridine alkaloids, which are toxic to dogs. The highest proportions are in the bulbs. Eating amaryllis can cause vomiting, changes in blood pressure, tremors, and seizures. 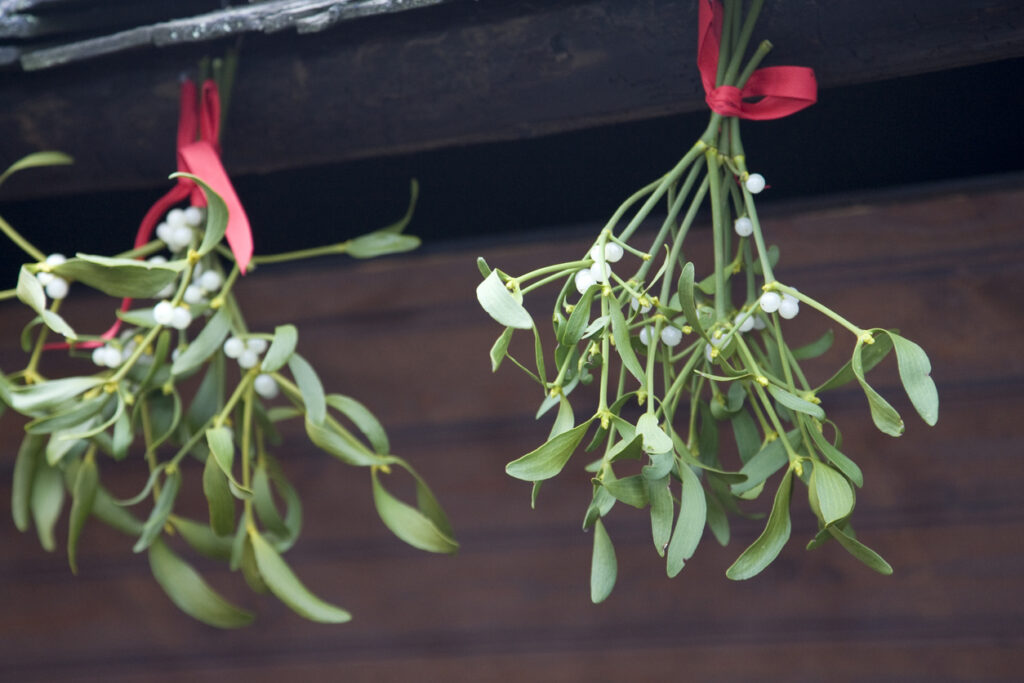 Mistletoe is one of the most poisonous plants where dogs are concerned. If eaten, it can cause vomiting, diarrhoea, laboured breathing, shock, and even death from cardiovascular collapse.

While holly berries are an important winter food source for birds, they are toxic for dogs. Several varieties of holly berries include saponins, which can cause severe vomiting and diarrhoea if ingested. Other symptoms can include drool, lip smacking, and head shaking. There is also the more obvious problem of the prickly leaves potentially causing injuries to the face, eyes, and feet. 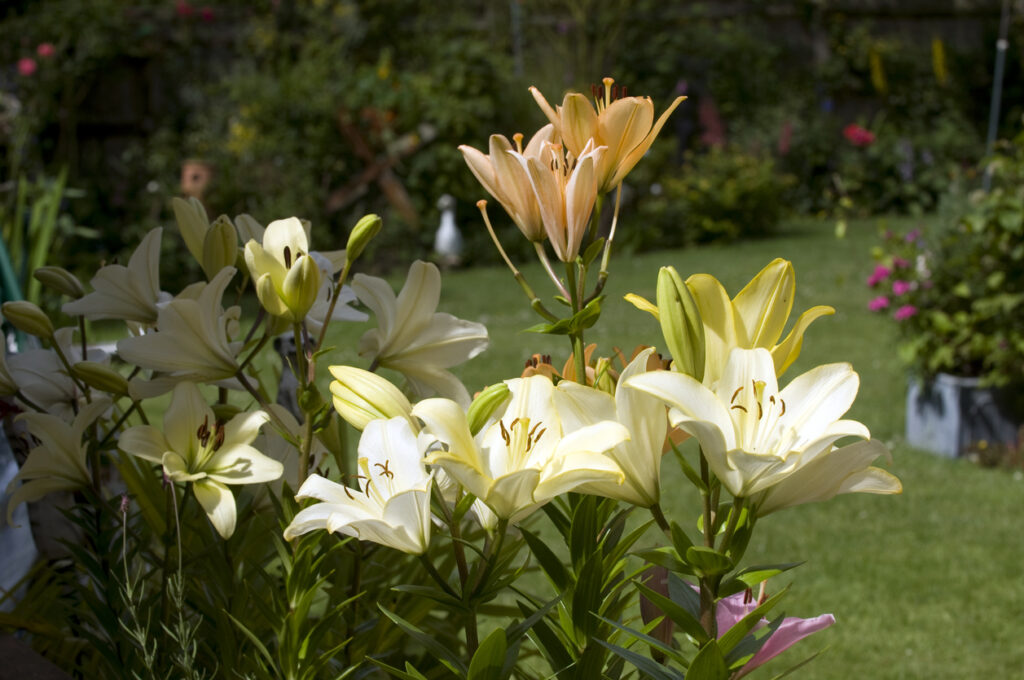 A favourite flower amongst many, lilies are poisonous to our pets, especially cats. They contain highly toxic substances; even the water from the vase can be potentially fatal. Whilst lilies don’t pose quite as severe a risk to dogs, they are still dangerous – you should contact your vet if you suspect that your dog has consumed them. The calla lily, peace lily, lily of the valley, and palm lily are all deemed to be dangerous to dogs.

Lilies are very dangerous for cats, with the primary toxic effects being on the kidneys. Initial signs of toxicity include vomiting, lethargy, or a lack of appetite. As the toxin begins to affect the kidneys, these signs continue and worsen as the kidney damage progresses. Without prompt treatment by a vet, the cat may develop kidney failure within approx. 36–72 hours.

Originally known as the black hellebore, these hardy plants have been renamed Christmas roses despite bearing no relation to the rose and rarely flowering in December. They contain poisonous cardiotoxins and, if eaten by a dog, can cause diarrhoea, colic, lethargy, drooling, and abdominal pain. The entire plant is poisonous, including the roots, stem, and flowers.

Fuchsia plants, honeysuckle plants, pyracantha plants, rowan trees, and Christmas cacti are less likely to be highly toxic but should still be avoided, as they may cause some gastrointestinal disturbance.

Our articles are not a replacement for face-to-face vet advice. It’s important to consult with your vet on a regular basis to raise any pet concerns that you may have.

How to keep your pet comfortable in the heat

As the warmer weather is slowly approaching, so is the

How to keep your pet hydrated

The summer months are our favourite, from warmer days and